Throughout 2017 – the year marking our 40th anniversary – Champaign County Health Care Consumers (CCHCC) has worked tirelessly to protect health care for our community and our nation. We’ve helped educate, inform, and mobilize thousands of local residents in the fight to protect the Affordable Care Act (ACA) and Medicaid.

The drive to repeal and replace the ACA and to drastically cut the Medicaid program is temporarily stalled, thanks to fierce advocacy from concerned citizens and organizations across the country. This advocacy helped to save insurance coverage of an estimated 16 million to 32 million people, likely preventing thousands of early deaths. Your support and involvement were integral to this victory!

While we are all taking a well-deserved moment to celebrate and breathe a sigh of relief during this Congressional recess, we know that new dangers are on the horizon. The Trump Administration is already working to undermine the ACA in a number of ways, and Medicaid will continue to be at risk for devastating cuts in funding.

CCHCC plans to meet these threats head on, and we need your involvement and your financial support more than ever to continue the fight to keep our community covered. Beyond the fight to protect the ACA and Medicaid, we’ve also continued to provide free direct services to hundreds of community members every month to help them enroll in health insurance coverage, and gain access to care and affordable prescriptions.

We’ve Got You Covered – 40 Years and Going Strong!

Yes, it’s our 40th anniversary, but we’re not writing to you about celebrating this landmark and all our achievements over the past 40 years. We’re writing to you about the importance of our work, made possible by your financial support and involvement, and about how essential it is that we are still here, and going strong.

If one thing is clear after 40 years – and it has certainly been made clear so far in 2017 – it is that we always have to be prepared to fight to protect and maintain every health and social program that improves our lives – whether that is Medicaid, the ACA, Medicare, Social Security, or Food Stamps – because there are always people who want to cut or dismantle these programs.

In our community, CCHCC is an essential safeguard against efforts to dismantle these programs because we have the knowledge and experience to analyze policy and to inform and mobilize community members to protect their interests and the public’s health.

We’ve got you covered – both on the advocacy and community organizing side – fighting for good health care policy that will improve people’s health and their lives – and on the direct service side – providing free services to help people get health insurance coverage, access to care, and the social services they need.

CCHCC began 2017 knowing that we had to hit the ground running and be ready for the fight of our lives to protect health care for millions of Americans. President Trump wanted to sign an ACA repeal bill on his first day in office, and the Republican majority in Congress virtually guaranteed this outcome. We knew that Medicaid cuts would also be part of any effort to “repeal and replace” the ACA and millions of lives would be at risk. Nothing short of an unrelenting, massive, and organized nationwide grassroots advocacy and organizing effort could stop this legislation from getting passed.

CCHCC launched a fierce and effective advocacy and community organizing effort to protect the ACA and Medicaid. We worked in partnership with a coalition of local, state, and national organizations and individuals dedicated to defending the right to quality affordable health care. We made sure our community members had the information, policy analysis, skills, and tools necessary to take action to protect our nation’s vital health care programs.

Policy analysis, leadership, education, and outreach. So much of the work that CCHCC has done this year in the fight against ACA repeal and Medicaid cuts involved detailed health care policy analysis of the legislation being put forward. We had to cut through the “spin” and the willfully misleading information provided by the proponents of the House and Senate health care bills, and provide real policy analysis to let community members know how the legislation would actually affect their lives. CCHCC emerged as the foremost source of Medicaid and ACA policy information in our community.

Community Meetings. CCHCC organized a number of community meetings in Champaign-Urbana to provide up-to-the-minute information on proposed legislation. We also spoke at many events in other communities and counties – everywhere from White Heath to Charleston to Edwardsville – working in partnership with other community groups, providing them with written information that could be distributed far and wide. 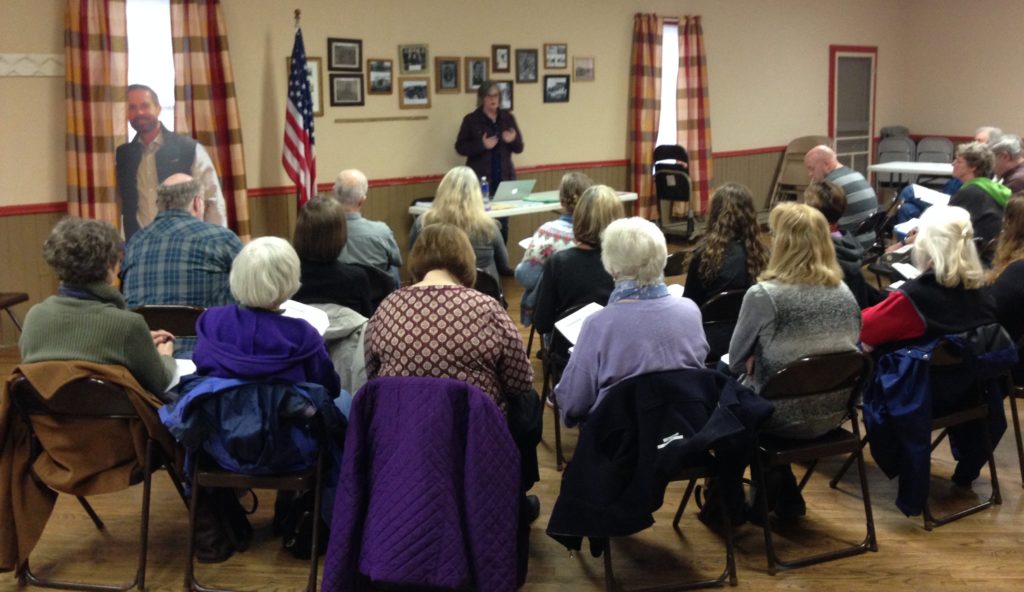 Press Conferences. We held press conferences to get media coverage so we could reach the broader public. Our press conferences featured affected consumers telling their stories about how the ACA and Medicaid helped them, and what it would mean to lose that coverage. We also participated in press conferences with Senator Dick Durbin.

Challenged Rep. Rodney Davis (IL-13) to a Debate. Rep. Rodney Davis actively promoted the House Republican health care bill, the American Health Care Act (AHCA), which would have caused tens of millions of Americans to lose their health care coverage. Rep. Davis routinely misinformed the public about the impact of this bill while also refusing to hold a Town Hall meeting, so CCHCC’s Executive Director challenged Rep. Davis to a debate about the legislation so that the public could hear a discussion on the health care policy implications of the AHCA. Despite repeated invitations, Rep. Davis never responded.

Mobilizing the community. Beyond providing policy analysis and accurate information, much of our work also focused on empowering and mobilizing community members to take action. We issued calls to action so that our community members could join millions of people around the country in collective action, to do their part to keep America covered. We mobilized community members to place thousands of calls to members of Congress, held in-district events, and attended “open office hours” such as those held by Rep. Rodney Davis. 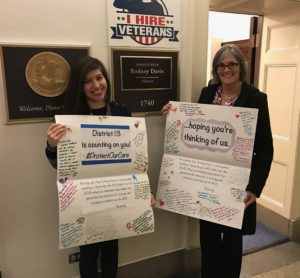 members write and submit many Letters to the Editor.

Protecting coverage for millions of Americans involved relentless pressure, direct action, human stories, strategic coordination, a firm grasp on health care policy, and a focus on community organizing. Facing odds that seemed insurmountable, thousands of average Americans – including those in our community – were mobilized into action to protect the ACA and Medicaid. CCHCC’s 40-year history ensured that we could be here to support and mobilize our community.

Beyond the fight to protect the ACA and Medicaid, CCHCC has also continued to provide free direct services to hundreds of community members every month to help them get health insurance coverage, access to care, and affordable prescriptions.

Health insurance enrollment – We’ve got you covered! Since the very first ACA Open Enrollment in 2013, CCHCC has helped thousands of community members enroll in health insurance coverage through the ACA’s Marketplace (healthcare.gov) and Medicaid programs. Our staff are the most experienced enrollment counselors in our community because they have been doing enrollments continuously, without interruption, since the Marketplace first opened in the fall of 2013. In fact, because of the continuity of their work, our staff are among the most experienced enrollment counselors in the nation.

A long track record of service. CCHCC was well-suited to take on the enrollment work made possible by the passage of the Affordable Care Act – enrolling people in private plans through the Marketplace (healthcare.gov) and expanded Medicaid – because we already had a long track record of providing health insurance enrollment services to people who qualified for Medicaid and All Kids, and Medicare.

No federal or state funding for enrollment work. When the ACA was being implemented, state and federal grants became available to organizations to do enrollment work. Unfortunately, as a small local non-profit, CCHCC did not qualify for state or federal grants for enrollment work. Nonetheless, we made the commitment to provide these services because we knew the community would turn to us for that kind of help because of our long track record of serving the community and our ability to provide free direct services. Our staff became federally certified application counselors, and we have helped thousands of community members gain coverage. CCHCC responds to community need, not just opportunities for funding. Your financial contributions have helped make our enrollment work possible! 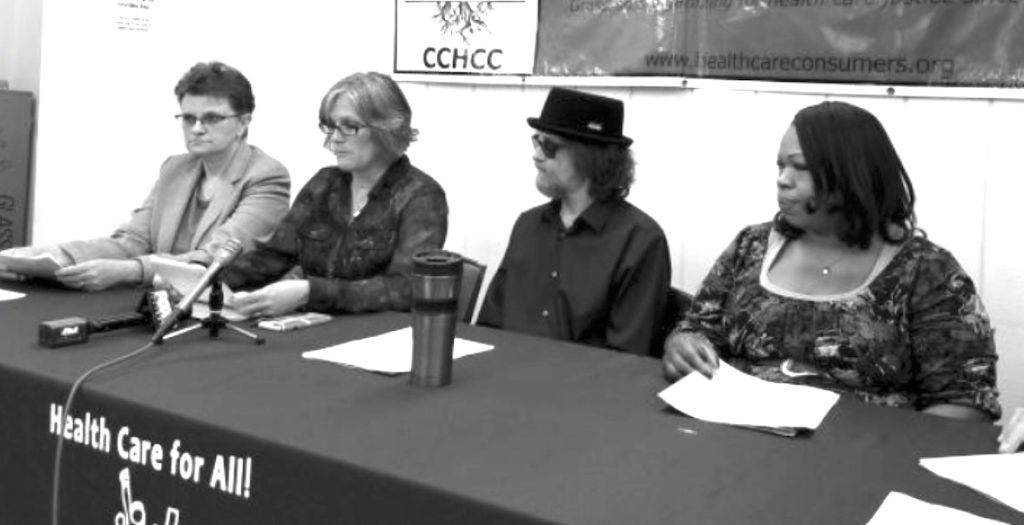 Affordable Care Act Open Enrollment Community Meeting – Thursday, October 26, 2017 at 6 p.m. at Champaign Public Library. The ACA Marketplace (healthcare.gov) Open Enrollment period is from November 1 through December 15, for people who are seeking an individual health insurance plan – usually individuals who do not have coverage through their employer.

What’s Ahead and How You Can Help

As Congress returns from recess after Labor Day, expect to see more legislative activity once again. While there are some promising bi-partisan efforts to keep an eye on, you can also expect to see other efforts to repeal the ACA and cut Medicaid funding. Beyond the ACA and Medicaid, there may be efforts to cut funding for Medicare and Social Security as part of the budget and “tax reform” process. CCHCC will keep up with these developments and lead the advocacy and community organizing efforts to protect the ACA, Medicaid, Medicare, and Social Security.

We will also be urging support for the reauthorization of the Children’s Health Insurance Program (CHIP), whose funding is set to expire on September 30, 2017. CHIP has been instrumental in providing comprehensive health insurance coverage for millions of children in our nation, even before the ACA.

CCHCC needs your financial support, and your active and ongoing involvement in our efforts to protect the health security of millions of Americans and to help our community members get covered. Please fill out the enclosed pledge form, and let us know if you can help with sharing information, joining our e-mail listserv to stay updated and receive urgent calls to action, pledging to become a “health care voter”, or making a contribution to help support CCHCC’s ongoing advocacy and organizing efforts, as well as our enrollment work.

We thank you for your commitment, and for your ongoing support and involvement!