Ebbie passed away, gently and without any discomfort, at Carle Hospital on the morning of Sunday, April 22, 2018, after a brief illness.

For more than 10 years, Ebbie – along with his wife Maggie – has been a resident leader of the 5th & Hill Neighborhood Rights Campaign. 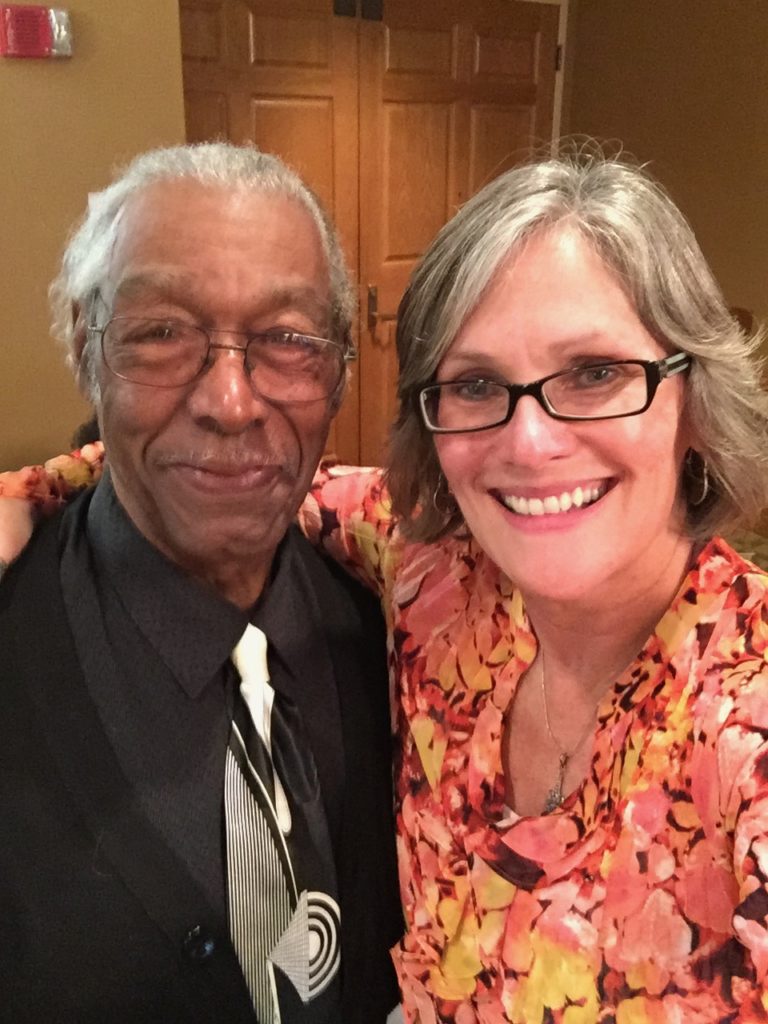 The 5th & Hill Neighborhood Rights Campaign, started in 2007, is an environmental justice campaign dedicated to protecting the health of the neighborhood residents and the rights of the community in relation to the former manufactured gas plant toxic site owned by Ameren, located at 5th and Hill Streets in Champaign. CCHCC is organizing this campaign in collaboration with neighborhood residents and former residents. The Campaign is currently focused on trying to make the IL EPA and Ameren expand the area of investigation in order to identify all toxic contamination that resulted from the operation of the former manufactured gas plant.

The 5th & Hill Neighborhood Rights Campaign has had many significant victories over the past 10+ years, under the leadership of Ebbie Cook, along with Maggie Cook, MD Pelmore, Eileen Oldham, Sandra Jackson, JB Lewis, and Jessie Clarette. Some of those victories include forcing Ameren to excavate and remediate the 5th & Hill property, compelling the City of Champaign to “cap” the toxic pipe that funneled tons of coal tar into the Boneyard Creek, filing a lawsuit against Ameren, and engaging the US EPA to investigate indoor vapor intrusion into residents’ homes (currently ongoing) as a result of the spread of toxic chemicals through the soil and groundwater in the neighborhood.

To be fair, Maggie Cook joined the Campaign first and she has been an outspoken voice for the community in this effort. Maggie’s husband, Ebbie, would always ask Maggie what was happening at the meetings that she would attend. Maggie simply told Ebbie, “Come see for yourself.” And once Ebbie started attending meetings, he never stopped. And not only did Ebbie attend every possible meeting (twice a month meetings!), he read every bit of information and became an informal historian for the Campaign, keeping press clippings and environmental testing reports and correspondence from various agencies.

Ebbie did countless media interviews, met with local, state, and federal officials, canvassed and educated the neighborhood, spoke at Champaign City Council meetings, and was vigilant in the neighborhood. And Ebbie, along with the other resident leaders, spoke at many UIUC classes and forums, joking that he never went to college but he got to teach at college. Ebbie found a special joy in working with young people, and engaging UIUC undergrad and grad students in the 5th & Hill struggle.

Ebbie’s commitment to 5th & Hill was profound and abiding, and he appreciated every single person who ever helped out in any way – big or small. He knew that it took all of us. Ebbie made sure everyone felt welcome and appreciated, and he loved our multi-generational, multicultural group with people from all walks of life and from all parts of the C-U community, the country, and the world. Every single activist and volunteer who ever helped with the 5th & Hill Neighborhood Rights Campaign was part of Ebbie’s “5th & Hill Family”.

Ebbie really didn’t tolerate any nonsense – especially from agency and government and Ameren leaders. And he was a stickler for detail (he caught all my mistakes on the agendas I wrote). But he was always warm and inclusive, and if you came to a 5th & Hill meeting and wanted to help, you were alright with him, and he appreciated you – probably more than you knew. And Ebbie never forgot anyone – he had an amazing memory. In fact, when Ebbie was in the hospital during his brief illness leading to his death, we had several conversations about 5th & Hill, and Ebbie asked me about many of the people who had volunteered with the Campaign over the years. He wanted to make sure everyone was doing alright.

Ebbie was also a great teacher. He didn’t try to be a teacher, but he was.

And him and Mr. Pelmore – at times they were like two teen-aged boys on escapades. They went on adventures, investigating 5th & Hill, following the trucks that were hauling toxic waste out of the neighborhood; later on reporting to us where the trucks had gone and what they had seen. Ebbie patrolled the neighborhood, checking on residents and seeing what was up and what was happening, and calling me if there was something going on.

Ebbie really loved his life, and he lived it well. And it showed – there are so many people whose lives were intertwined with his, and who he affected and enjoyed. Ebbie had a rich life, if friendships and love are the currency of life.

Ebbie was a real and effective leader for 5th & Hill. There is no way we could still be going with this 10+ year campaign if it were not for Ebbie’s leadership and dedication, along with that of Mr. Pelmore, Maggie, and our other resident leaders – Eileen, Sandra, JB, and Jessie. I honestly couldn’t tell you whether Ebbie thought of himself as a leader or not. He wasn’t much for labels. He was about the work. And he made sure that we enjoyed ourselves as we did the work. There was always time for camaraderie and teasing and joking. And if you teased him, he would always laugh and say “You got me!” and he’d laugh along with you.

Even as my heart is broken, it is also full – full with love for Ebbie, and for Maggie and for all of you who Ebbie loved and appreciated; full with gratitude that my life has been graced by Ebbie and the rest of our 5th & Hill family. What we have is special, and what we have been doing and will continue to do is special. And we walk among giants – people who are just truly some of the finest and kindest and fiercest and most protective people one could hope to ever know. Ebbie was a giant among us even as he was salt of the earth, a unique personality and soul. He melted my heart.

Ebbie loved CCHCC and 5th & Hill. And I know – I know with every fiber of my being – that if you have ever helped or supported the 5th & Hill Neighborhood Rights Campaign or CCHCC, Ebbie would want me to thank you and tell you he appreciated you.

He so much appreciated that you all would care about his neighborhood and the people there, and that you would care enough to give your time, talents, and energy, and financial contributions. You were part of Ebbie’s 5th & Hill Family. And that, my friends, is a sacred and beautiful gift.

Below are the details for the memorial service for Ebbie Cook.
WHEN:  Monday, April 30, 2016
TIME:  10 a.m. to noon is visitation; service begins at noon
WHERE: Bethel AME Church – 401 E. Park Street, Champaign, IL 61820
DETAILS:  If you want to attend, you should plan to get there early. The church is pretty small, and I’m sure it will be packed!

As I reflect on Ebbie Cook’s life and work with CCHCC and 5th & Hill, I am filled with wonder and gratitude for Ebbie, and for his family – Maggie, and sons “Jock”, Vic, and “Boogie” – along with all the people who make up the 5th & Hill Campaign, and CCHCC. We are a collection of people who work to improve the health and lives of our fellow community members, and I can’t help but be filled with gratitude for the grace of people like Ebbie Cook, and all who work for the greater good.