2017 taught us two important lessons: 1) there are politicians who will stop at nothing to try to send our nation back to a time when health care was a privilege afforded only to the well-off; and 2) through collective action – grassroots organizing and advocacy – we can fight back, and win!

Although it may not feel like we “won” in 2017, we did, in fact, win. Collectively, throughout the country, as a result of grassroots organizing and advocacy, we, the people, saved Medicaid and the Affordable Care Act (ACA)! Democracy showed up to fight for health care in 2017, and won!

Champaign County Health Care Consumers (CCHCC), with our powerful grassroots organizing and advocacy, helped lead the local fight to protect our care. Unfortunately, that fight is not over – there are new and different kinds of threats to the ACA, Medicaid, and Medicare – and CCHCC needs your ongoing involvement and support to protect these programs.

The Fight to Protect Our Care
The fight to protect our care in 2017 was a monumental effort. The threats to the ACA and Medicaid were very real and serious. Repeal of the Affordable Care Act (ACA) and dismantling of the Medicaid program were central to the GOP’s platform.

But, despite the GOP’s control of Congress and the Presidency, their organized and unrelenting attacks on the ACA and Medicaid, and their use of the Budget Reconciliation process to try to make sweeping changes to these programs, Medicaid remains intact, and the ACA remains largely intact. This victory of protecting the ACA and Medicaid was no small feat!

How We Win – Powerful Grassroots Organizing and Advocacy
CCHCC mobilized and helped lead our community’s effort to protect the ACA and Medicaid, and it was an enormous effort, coordinated with statewide and national efforts!

This effort required constant vigilance, policy analysis, public education, numerous calls to action, and teaching people how to take action. And it consumed almost the entire year. We held community meetings, activist trainings where we taught people how to call their legislators (many were making these calls for the first time in their lives), issued action alerts, spoke to the media, and brought consumers’ stories to the media and to legislators. We coordinated with statewide and national efforts to fight off the attacks on the ACA and Medicaid. (And we did all of this while still serving our clients and getting people enrolled in health insurance.)

2017 taught us that we win by organizing. We win by activating and mobilizing local residents to fight for our health care and by coordinating our local efforts with statewide and national efforts in order to lift our voices in unison to protect our care. 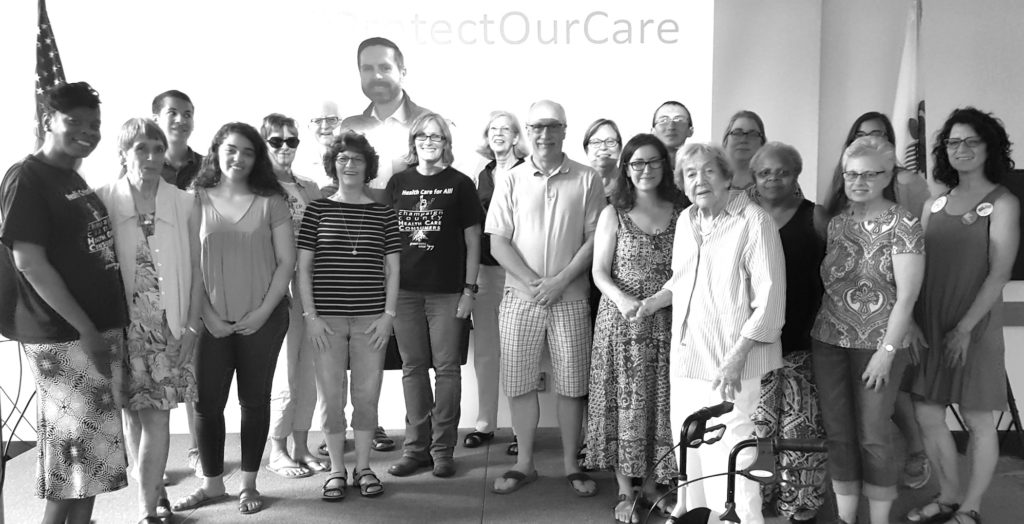 The Fight to Protect Our Care Is Not Over – New Threats Ahead
We cannot rest on the progress that has been made – the fight is not over. The threats to the ACA, Medicaid, and Medicare have already begun, following the passage and President Trump’s signing of the massive tax cut bill, and the recent release of his budget proposal. The efforts to cut health care programs in 2018 will come through the budgetary process, and administrative and rule-making processes at the federal and state levels.

The GOP in Congress passed, and President Trump signed the tax cut bill that gives very wealthy people and corporations giant tax cuts, and that drives up the deficit by $1.5 trillion. Now, Republicans in Congress and the president are using the deficit as an excuse to propose slashing health care programs and the safety net, because “we can’t afford it”.

Speaker Paul Ryan has emphasized the need to “reform” (i.e., cut funding for) Medicare and Medicaid, even though he acknowledged that incremental action is a more realistic path. That incremental action will come in many forms at the state and federal levels. For example, the Trump Administration is already allowing states to cut Medicaid through waivers that allow states to impose a variety of rules and requirements – such as “work” requirements and lifetime limits – on people with Medicaid that do not advance any health policy goals but do result in reducing people’s coverage and access to Medicaid.

When we stand together, we are strong!
If 2017 has taught us anything, it is that when we stand together, we are strong! Our work to protect our care is far from over. The threats to the ACA, Medicaid, and Medicare did not end in 2017. You can count on CCHCC to lead the fight locally, but we can’t do it without you. Please fill out the enclosed pledge form to let us know how you can help in the fight to protect our care.

We thank you for your commitment, and for your ongoing support and involvement!