Thanks to everyone who helped make last week’s protest at Carle Clinic a success! Many people came out to the protest, and many more helped distribute flyers, make protest signs, helped photocopy materials, and much more!

The protest was on Tuesday, Nov. 20 at 11 a.m., and we had a great turnout! We had between 40 and 50 protestors, and we got news coverage on two TV stations, two radio stations, and in the News-Gazette.

The show of support from motorists driving by was overwhelming. For the entire duration of the protest, lasting an hour and a half, people were driving by and honking in support of the protestors. We did have a delegation who tried to go into Carle Clinic to deliver a Thanksgiving card to Dr. Bruce Wellman and the Board of Directors. The card was signed by everyone at the protest, and had a letter detailing the policy changes that Carle Clinic could implement which would immediately alleviate the health care access crisis in our community.

As we went to deliver the letter through the main entrance at Carle (where the circle driveway is, in front of the parking garage), the security guards literally ran to the sliding glass doors facing University Ave., and locked the doors. Our delegation, along with patients/visitors to Carle, were locked out. So, we walked around to the other side to try to enter through the sliding glass doors that face north, and we were stopped by security guards. We advocated for them to let in the patients/visitors who were not with us, and we said that we wanted to deliver the card to Dr. Wellman. They still denied us access, so we returned to the protest and continued for another half-hour.

Click here to listen to the WILL Public Square from 11/16/2007 read by Health Care Access Task Force member Cindy McDonnell about the protest (MP3). 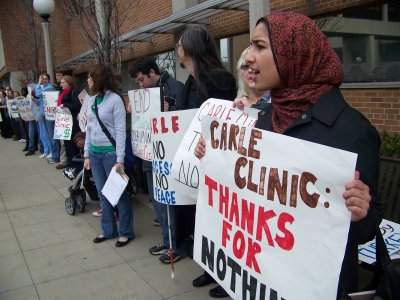 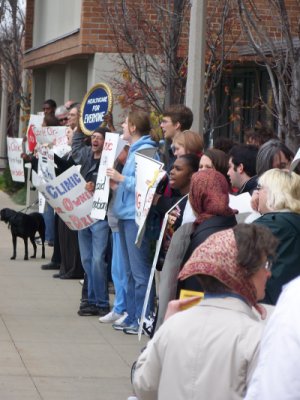