It is with a very heavy and broken heart that I write to tell you about the death of Robert G. Kirchner, a dear friend, and hero, to us at Champaign County Health Care Consumers (CCHCC). 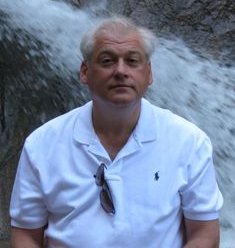 Bob Kirchner, only 54 years old, died of a heart attack on the morning of Sunday, April 17. Bob was a local attorney who defended many who had no resources; he also helped and legally supported many local non-profits, including CCHCC, and he served on the County Board and the County Board of Health — among many other activities. Bob was a true champion of justice for people, and for the organizations who fight for justice for the people.

Our deepest sympathies go to Bob’s wife Gerri Kirchner, with whom he had a great and beautiful partnership and to whom he was utterly devoted. Our sympathies also go to Ruth Wyman, our dear friend and the young attorney with whom Bob worked for many years.

A short obituary can be found at The News-Gazette here.

And a nice feature on Bob can be found at The News-Gazette in their “Life Remembered” article here.

WILL-AM 580 Radio also did a nice piece on Bob, and that can be found here.

But I wanted to take this opportunity to pay tribute to Bob, in the way that we knew him at CCHCC, and the way I knew him as a friend and champion of justice.

I first met Bob in 1999, when I was a scared and very green “Interim Director” at CCHCC. The occasion for meeting Bob was that he agreed to help CCHCC, pro bono, in a legal struggle against Provena Covenant when the hospital ended the Medicare 100/Plus Program. (Please note that CCHCC now works closely with Provena Covenant, and the Medicare 100/Plus Program was reinstated in 2005.)

It was a very tough struggle, for many years. Probably for many more years than any of us had anticipated. And there are many stories I can tell, but I will just share one story — it is about the moment, when as an adult, for the first time in my life, someone became my personal hero. Someone swept in and “saved” me (and CCHCC) from a terrible and terrifying situation. That person was, of course, Bob.

The struggle with Provena Covenant was very nasty and I was clearly out of my league as a brand new Director. One day, I received a very intimidating package from the then-IL Attorney General’s office. It was a set of “interrogatories” demanding that I produce a bunch of documents and answer a bunch of questions that clearly implied that CCHCC was undertaking fraudulent and illegal activities in the efforts to reinstate Medicare 100/Plus. The AG’s letter basically said that we were lying to seniors about the Program and trying to coerce under false pretenses their involvement in the program. It also said that the IL AG’s office could bill CCHCC for the costs of their investigation into us! An action like this could have sunk CCHCC financially, and the threat was very real.

The first person I called was Bob. He was calm, of course, and I felt the tiniest bit reassured. I was a very new Executive Director and I didn’t want CCHCC to fail on my watch, and certainly not for something so unfair. Bob set up a meeting with staff of the AG’s office, and Mike Doyle and me. We traveled to Chicago for the meeting, where Mike and I answered a bunch of interrogatories to the AG’s staff. It was terrifying, and I could see from the cold blank stares of the AG’s staff that it was not really going well.

I never understood where the AG’s office got the idea that CCHCC was defrauding consumers, and when I tried to ask about this, we got no answer.

Then, out of nowhere, Bob said, in his very calm and soft voice, that he knew that high-ups from Provena had met with staff from the AG’s office, and he gave the dates and times of the meetings — and he looked at each one as he said “they met with you, and you, and you, and you…” — and he went on to say that the AG’s office seemed to be subverting their legal and ethical duties in order to do the bidding of a corporation.

Followed by awkward throat clearing noises and furtive glances between the AG’s staff.

And I sat there knowing that Bob had just dropped a bombshell that was going to turn everything around. What the AG’s office was doing was illegal and wrong, and they were busted!

In that moment, I felt that I and CCHCC had been rescued from the forces of corruption, and Bob became my first personal hero.

Bob had had this information up his sleeve, from who knows where. He was never one to brag or talk unnecessarily.

In less than a week, CCHCC got a letter from the AG’s office saying that they were dropping their investigation and thanking us for satisfying their interrogatories.

That’s just one of many stories. But it’s the one where I learned that I could totally and completely count on Bob, and that he would fight with all he had in the pursuit of justice. Not only did Bob become my personal hero, but I knew that he was a champion, the likes of which I’d never known. I never imagined that he wouldn’t be here…

Because of Bob’s tenacious, principled and dedicated work on behalf of CCHCC, we established in 2005 the Robert G. Kirchner Legal Justice Award (read more about the award at the bottom of this message).

Beyond helping us with the Medicare 100/Plus Program, Bob was a champion for low-income children while he served on the County Board and the County Board of Health. On Bob’s watch, we (CCHCC, Bill Mueller, working with public health advocates on the Board of Health — Michele Spading, Karen Bojda, Jan Thom and others) were able to create the child dental access program to provide free dental care to low-income county children. Believe it or not, we had to fight year after year to keep that program alive — there were opponents to the program! And year after year, Bob championed that good fight and the low-income children got dental care.

Over time, that program grew and led to the creation of the now well-established non-profit, SmileHealthy, where Nancy Greenwalt is the Executive Director.

These are just a few examples of Bob’s work — testament to his commitment to justice and his dedication to making concrete improvements in people’s lives.

But Bob wasn’t just a champion and a fighter. When he fought for you, or your cause, he took you under his wing, and you became friends. He was a true and loyal friend, always concerned about your well-being. In his own unique way, Bob was a real caretaker. He made you feel looked after and safe, and he was tireless in all that he did. He was so tough — so very tough and fierce when he had to fight — but he was gentle and kind and protective as a friend.

And he was generous.

I don’t know how many suffering low-income clients I brought to Bob to help with some legal issue or another, where I would offer to pay for their consultation or they would offer to make payments as they were able to. Bob always helped my clients, and me too, pro bono. One time I asked Bob why he wouldn’t let me pay him for legal services he provided to me, and he said that it was because I was always helping others — as if somehow there was a community debt and that community debt was borne by him and it was up to him to re-pay it — as if he himself wasn’t also always helping others.

I marvel when I think of how generous Bob was with his time, energy, intellect, resources — and that at the core of it all was his heart:
his deep and abiding love for people, his love for justice, and his outrage at injustice and corruption and the devastation that those produce.

We at CCHCC mourn the death Bob Kirchner, a great and steady champion for justice, a champion for the people, and our beloved friend. We wish to honor and celebrate Bob’s life and his accomplishments by working to protect the valuable programs in our community that Bob helped to create, helped to save, and helped to maintain.

With deepest sympathies to all who mourn for Bob Kirchner,