Social Security and Medicare are being unfairly targeted to reduce the budget deficit and we need your help. If you helped us fight against the efforts to privatize Social Security back in 2005, you know that the forces working against us are strong but we are stronger. We stopped them last time and we will stop them again, but only with your help! 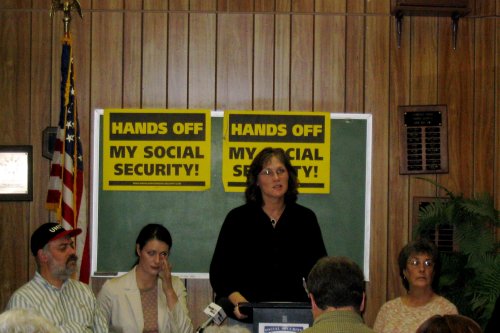 ***CCHCC is holding a press conference on Tuesday, November 23 at 11 a.m. at our office to talk about Social Security and the budget deficit reduction plans and where we stand. Please join us! (there is more information at the bottom of this page) ***

1. What is the National Commission on Fiscal Responsibility and Reform?
2. Why cuts to Social Security and Medicare should NOT be on the table
3. Recent Developments – Proposals being put forward
4. Take Action!
5. Stay Tuned…

If you have been following this issue, you can skip down to the section entitled “Recent Developments” to get the latest updates and take action.

1. What is the National Commission on Fiscal Responsibility and Reform?
President Obama created the bipartisan National Commission on Fiscal Responsibility and Reform with the charge of “identifying policies to improve the fiscal situation in the medium term and to achieve fiscal sustainability over the long run.” Specifically, the Commission will propose recommendations designed to balance the national budget, excluding interest payments on the debt, by 2015. In addition, the Commission will propose recommendations that meaningfully improve the long-run fiscal outlook, including changes to address the growth of entitlement spending and the gap between the projected revenues and expenditures of the Federal Government.

The Commission is discussing a number of initiatives to reduce the budget deficit, but entitlement programs such as Social Security and Medicare have risen to the top of the agenda. Members of the Commission have proposed raising the Social Security retirement age (it has already been raised to age 67). They have also proposed changes to Medicare that would shift rising health care costs onto Medicare beneficiaries and lead to the privatization of the Medicare program. CCHCC believes that cutting Social Security and Medicare is not only harmful for millions of Americans, but also entirely unnecessary and should be taken off the table.

Millions of Americans count on Social Security as a financial foundation, and often a financial lifeline. There are currently 53 million Social Security beneficiaries, including retirees, people with disabilities, and families receiving survivor’s benefits. Social Security is particularly important for our nation’s aging population. In fact, two out of three seniors rely on Social Security for half or more of their income.
CCHCC, along with health care advocates across the country, was extremely active in opposing the privatization of Social Security in 2005. Looking back, we see just how important that victory was. Many Americans have seen their retirement savings plummet during the Great Recession. If Social Security had been privatized and left to the whims of the market, it may not be here today. We must take a stand once again to protect this important national safety net.

Over the summer, CCHCC hosted Columbia Journal Review journalist, Trudy Lieberman, as she travelled the country writing stories about Social Security. Lieberman was working on a series of articles about the importance of Social Security and wanted to speak to individuals in the Heartland of the U.S. She spoke with several community members and CCHCC supporters and has used those interviews for a series called “Social Security in the Heartland.” You can check out those stories using the link below and comment on the message board.

You can read the series, “Social Security in the Heartland” here.

The Fiscal Commission has also suggested cuts to Medicare funding as a way to reduce the deficit. This policy would turn Medicare into a “premium support” program that would limit the rate of increase of federal spending per beneficiary to one percent above the growth rate of the economy. This means that, if health care costs increase at a higher rate, which they do and likely will continue to do, the cost will be pushed onto Medicare beneficiaries with higher premiums. Medicare beneficiaries would then have to choose between paying higher premiums for Traditional Medicare or buying a private plan from a “Medicare Exchange” that may have lower premiums but would likely offer less coverage. This trend would lead to higher costs for Medicare beneficiaries and lead to the privatization of the Medicare program. This policy would lead to the dismantling of a program that has lifted millions of seniors out of poverty over the past 45 years and CCHCC does not believe that Congress should be balancing the budget at the expense of our nation’s most vulnerable citizens.

3. Recent Developments – Proposals being put forward
On November 10, 2010, the commission co-chairs, Alan Simpson and Erskine Bowles, released their deficit reduction proposal as a starting point for the commission’s final proposal. The co-chairs’ proposal includes a gradual increase of the Social Security retirement age from 67 to 68 by 2050 and to 69 by 2075. Their proposal can be found here.

Commission member, Alice Rivlin released an alternative proposal that includes the Medicare cuts that we explained above. Her proposal can be found here.

CCHCC strongly opposes both of these plans and will fight against these harmful cuts. However, we were very pleased to see that Commission member, Rep. Jan Schakowsky (IL), has introduced a deficit reduction plan of her own that does not include any cuts to Social Security or Medicare. In fact, Rep. Schakowsky has been very vocal in her opposition to any deficit reduction measures that would hurt middle- and low-income families. CCHCC’s Medicare Task Force had the opportunity to meet with Rep. Schakowsky in August to discuss her position on the Fiscal Commission and we are very happy to see some of the issues that we discussed included in her proposal. Rep. Schakowsky’s proposal includes raising the Social Security payroll tax cap to help fund Social Security without any cuts to benefits. She also includes benefits to Medicare for which we’ve been advocating for several years. Schakowsky’s proposal calls for the creation of a Medicare-administered drug plan and negotiation for lower drug prices for Medicare beneficiaries. These measures are not only good for Medicare beneficiaries, but they will create savings and help lower the budget deficit in a responsible way. You can read Rep. Schakowsky’s budget deficit reduction plan here.

The Fiscal Commission is currently looking at these three proposals and making negotiations to combine them into one final proposal. They must vote on that final proposal by December 1, 2010. If the proposal is passed with at least 14 votes, the proposal will go to Congress for an up or down vote before the end of the year. This is all happening very quickly and we need to make our voices heard to make sure that Congress does not attempt to balance the budget on the backs of seniors and middle- and low-income Americans.

4. Take Action!
ATTEND CCHCC’S PRESS CONFERENCE:
CCHCC, along with the Illinois Alliance for Retired Americans and the Campaign to Strengthen Social Security, will be holding a press conference at the CCHCC office on Tuesday, November 23, 2010 at 11 a.m. to announce our opposition to any cuts to Social Security and Medicare and express our support for Rep. Schakowsky’s Deficit Reduction Proposal. Please join us at our office at 44 E. Main St., Suite 208 Champaign, IL 61820 as we educate the community on this important issue.

CALL SEN. DURBIN:
Unfortunately, Sen. Durbin has not yet declared his opposition to the proposals or the parts of the proposals, that call for cuts to Social Security and Medicare. We would like to see Sen. Durbin endorse Rep. Schakowsky’s proposals, or at the very least, declare his opposition to making cuts to Social Security and Medicare as part of the deficit reduction plan.

Please call Sen. Durbin and urge him to vote AGAINST any plans to cut Social Security or Medicare, or to privatize Medicare. Urge him to support Rep. Schakowsky’s deficit reduction plan.

Calling Script:
State your name and that you’re an Illinois resident.
Say you’re calling because Sen. Durbin is on the budget commission and you want to urge him to vote AGAINST any plans to cut Social Security or Medicare, or to privatize Medicare. Urge him to support Rep. Schakowsky’s deficit reduction plan.

CALL AND THANK REP. SCHAKOWSKY:
Call Rep. Schakowsky to thank her for her support in protecting Social Security as a lifeline for millions of Americans.

Calling Script:
State your name and that you’re an Illinois resident. Say your calling to express your support for Rep. Schakowsky’s Deficit Reduction proposal. Say you want to thank her for her commitment to protecting Social Security and Medicare and encourage her to fight to make sure any cuts to these important programs are not included in the Fiscal Commission’s final proposal. Thank you.

5. Stay Tuned…
We at CCHCC will be sending out updates as more comes up over the coming weeks. We will keep you informed and may call on you to call other members of the Commission or members of Congress once the Commission creates their final proposal.

Thank you for your support!