On Tuesday, March 24, a delegation of more than 20 Champaign County Health Care Consumers members traveled to the Capitol building in Springfield to demonstrate their unwavering support for House Bill 311 – the “Health Care for All Illinois Act.”  Our downstate delegation joined over 150 activists and health care providers from more than 30 statewide organizations for a day of legislative advocacy for single-payer health care in Illinois.

Our fist HB 311 Legislative Advocacy Day in Springfield was a great success, but it was only a first step. Our impressive turnout in front of the House Health Care Access Committee put us on the legislative map, but now it is time to move the bill!  See below how you can take action to continue advocating for HB 311 and health care for all Illinois.

From the first press conference at County Market in Champaign to the legislative hearing in the Capitol, our presence was felt around Springfield and in the media throughout the state. We were the only group of health care consumers and the only group submitting over 25 written public testimonies to our legislators!  Surrounded by a sea of nurses in their red union shirts, our delegation stood out from the crowd as the downstate delegation representing consumers supporting single-payer health care and HB311. 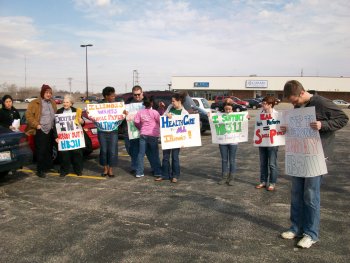 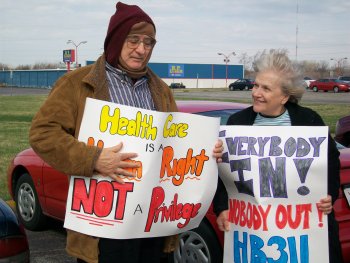 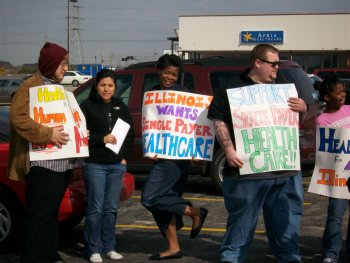 The day began with a press conference and send-off in the County Market parking lot here in Champaign.  Claudia Lennhoff, CCHCC’s Executive Director, was interviewed by the media while the delegation posed for pictures displaying signs and standing strong against the blustery 30m.p.h. winds.  Soon enough, our caravan survived the high winds and arrived in Springfield to join the hundreds of activists rallying on the Capitol steps.

By the time the press conference in the Capitol was set to begin, so many single-payer supporters had gathered that the press room had to be closed off at capacity. A fiery press conference followed,with organizers from the National Nurses Organizing Committee, Health Care for All Illinois, Physicians for a National Health Program, and Champaign County Health Care Consumers calling on legislators to enact real health reform bypassing HB 311.  Once again, we were the only group representing the voice of consumers and the people, and we did so with great pride and passion!

With a short break between the press conference and the legislative hearing, we braved the windy conditions again to satisfy our growing hunger…with pizza!  If anyone is ever near the Capitol and looking for a fun, family restaurant and delicious pizza, check out the Pizza Machine on the corner of 1st and Cook Streets.  With full stomachs, our next stop was Rep. Jakobsson’s office to hand-deliver a letter with over 500 names and 25 written testimonies supporting HB 311 and urging her to endorse the bill as well.

As the afternoon’s official legislative hearing on HB 311 in the House Health Care Access Committee approached, it became clear to Capitol staff that there were far too many single-payer activists to be accommodated in Room 118. The hearing was moved to the largest hearing room in the Capitol, and was still filled to the brim as more than 150supporters poured in. Tensions ran high as the day’s House session ran long,and activists took to the room’s microphones and began giving citizens’ testimony as they waited for the hearing to begin. 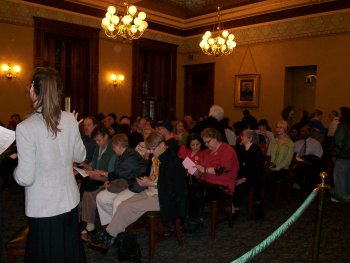 When Rep. Mary Flowers, the Chief Sponsor of HB 311, arrived and saw the massive crowd, she told the activists gathered there: “Today this is truly the People’s House. I’m fired up and ready to go!” The committee heard testimony from leaders Geri Jenkins and Donna Smith of NNOC, Nicholas Skala of HCAI, Allison Jones of CCHCC, and an array of patients, doctors, social workers and other health professionals.  Allison proudly represented the consumers by delivering another letter with over 500 names and a stack of your written testimonies to the committee.

No vote was taken on HB 311 at that session, but the hearing was a huge success in getting legislative attention for single-payer health coverage. Because of the hearing, HB 311 attracted 37new co-sponsors, including House Speaker Michael Madigan and Majority Leader Barbara Flynn Currie.  Unfortunately, the list of co-sponsors still does not include our own Rep. Naomi Jakobsson!

As the day came to an end and we prepared for the drive home, our spirits were lifted by the sight of a beautiful rainbow arching over the Capitol dome, a sure sign of hope and a reminder of the great start for the campaign for HB 311 and single-payer health care in Illinois! 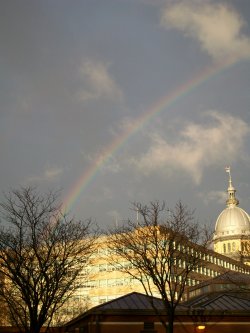 TAKE ACTION FOR HB 311 AND SINGLE-PAYER!

HCAI offers a tool with which you can write directly to your State Senators and Representatives. Visit www.Health Careil.org/writerep

For more information on how to submit your testimony as well as testimony talking points and a sample testimony, click here.

Thank you to all who supported or participated in the lobby day for HB 311! We appreciate your financial contributions, your written testimonies, your presence at our send-off on Tuesday morning, and your participation in our delegation to Springfield.   Let’s keep up the fight and continue working to make single-payer and health care for all Illinois a reality!