September 23 marked the six-month anniversary of the passage of the national health reform law, the Patient Protection and Affordable Care Act (PPACA). Many provisions of the new law pertaining to private health insurance and Medicare take effect on this six-month anniversary. Other provisions require action at the state level in order to be implemented. Some of the strongest and most important provisions of the PPACA will not be implemented until 2014, and CCHCC believes that is too long of a wait! We need to organize to pass state legislation to create those protections and benefits as soon as possible.

Please read on for more information about the health reform provisions that take effect now, the role of the state in health reform implementation, and to learn what CCHCC is doing to educate consumers and to organize for real insurance regulation and consumer protections.

Health Reform: New benefits and protections in the first six months
September 23, 2010 marked the six-month anniversary of the PPACA. This anniversary is an important benchmark in health reform implementation. Starting now, several consumer protections take effect to ensure consumers access to more secure and reliable coverage. Below is a quick summary of the most important provisions.
•    Insurers cannot deny coverage to children with pre-existing conditions.*
•    Insurers cannot rescind your coverage when you get sick.
•    Insurers are prohibited from placing lifetime limits on health insurance benefits.
•    Annual limits on health insurance benefits begin to be phased out.*
•    New private insurance plans must cover preventive services with no co-payments.*
•    Insurers are prohibited from charging you more when you have to get emergency care outside of your plan’s network.
•    Young people can get on, or stay on their parents’ health insurance plans until age 26.*
•    Choice of primary care doctor is protected, and women are allowed to go directly to their OB/GYN without a referral.*
•    Consumers gain new rights to appeal denied claims.
•    Medicare beneficiaries get $250 to help defray the cost of the Part D “donut hole.”
•    In 2011, Medicare beneficiaries get a 50% discount on brand name drugs, and the “donut hole” gets smaller.
•    Starting on January 1, 2011 Medicare beneficiaries will not have to pay any out-of-pocket costs for preventive care such as mammograms, cancer screenings, and annual physicals.
•    New high risk health insurance provided through the state for people who are “uninsurable” because of pre-existing conditions.
•    Employers with retiree health plans can apply for financial assistance through reinsurance funds to help employees, retirees, or to offset the employers’ own insurance costs.
•    Small businesses and non-profits that pay at least 50% of the employee insurance premiums can get tax credits for up to 35% (25% for non-profits).

** The fine print: Many of the new benefits and protections only apply to “non-grandfathered” or new plans. Some of the benefits only apply to group plans, rather than individual plans. See below for information about CCHCC’s upcoming Health Reform Educational Workshops. The first workshop, to be held on October 6, will focus on private health insurance plans (group and individual) and will provide consumers with the information they need to figure out which of these provisions apply to their health insurance plans, and whether their health plans are “grandfathered” or new, under the health reform law.

The role of the State in health reform implementation
The health reform law, PPACA, left many of the details of health reform implementation up to the states. Details such as whether to regulate premium increases, monitor compliance with the PPACA, the ability to sanction insurers who violate the law, and pay rebates to consumers, are left up to the individual states. Some states already have the regulatory infrastructure to do these things, but at least 23 states do nothing to regulate private health insurance premiums in the individual or the group markets – and Illinois is one of those states.

The good news is that IL Governor Pat Quinn, and the IL Department of Insurance are very actively involved in trying to create new regulations and mechanisms to protect consumers in our state. Governor Quinn has created the “Illinois Health Care Reform Implementation Council,” which is charged with helping to implement the new federal law. The Council will make recommendations to assist the state to establish a health insurance exchange (to go into effect in 2014) and enact other consumer protections. The Council must make its recommendations by December, and will be holding public hearings throughout the state from September through November.

Read on for information about what CCHCC is doing and how you can help.
CCHCC worked very hard around the passage of health reform and we could not have done it without your help, but clearly, our work is far from over! Check out these exciting Health Reform events and activities that CCHCC is working on, and join us in the fight for health care justice.

Health Reform Educational Workshops
On May 26, 2010, the Health Care Access Task Force held a community meeting at the Champaign Public Library to give a broad overview of the final health reform law and help individuals find out how health reform can help them. The community meeting was a big success and attendees were happy to receive real information on what to expect over the coming months and years as health reform is rolled out. 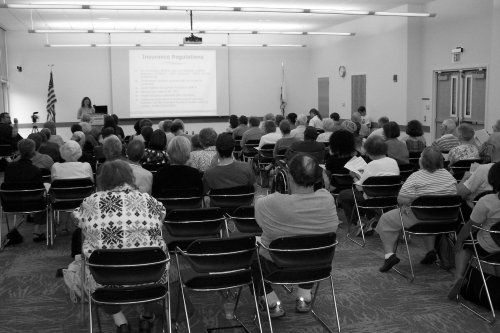 At the meeting, we surveyed attendees and found that community members want more details on three big issues: 1) insurance reform, 2) Medicare reform, and 3) local programs and resources for affordable health care for low-income and uninsured individuals.

We have scheduled a consumer education workshop on each of these topics for the first Wednesday of October, November, and December. Please click here for more details on our health reform workshops. CCHCC is dedicated to educating the community to make sure that everyone can take full advantage of all that health reform has to offer. We hope you will join us for one or more of these workshops.

Local Health Insurance Community Pledge
Although some of the best health insurance regulations that are included in the health reform law will not go into effect until 2014, nothing is stopping our local health insurance providers from enacting those changes sooner. The CCHCC Health Care Access Task Force has contacted Health Alliance Medical Plans and Personal Care HMO to ask them to make a pledge to our community to end some of the most harmful practices, such as exorbitant rate increases and gender and age discrimination in setting insurance premiums.

Since they will have to end these policies in 2014 anyhow, it would certainly gain these companies goodwill if they were to sign our Community Pledge and change these practices on their own without the mandate of law. We believe that Health Alliance should be particularly concerned with being a good corporate citizen now that they are owned by the non-profit Carle Foundation and should not be carrying out practices that are in contradiction with their parent company’s charitable mission.

If Health Alliance and Personal Care agree to sign our pledge and end these harmful practices, it will be a huge help for our community. However, if they do not, their reaction will show how necessary health reform and insurance regulations truly are. Please join us in this important effort. You can add your name to our letter to the major health insurers by checking the appropriate box on the enclosed pledge form.

Candidate Surveys
November is quickly approaching and campaign season is in full swing. CCHCC is a 501(c)(3) organization and we do not endorse candidates. However, we do work to educate voters and candidates about the issues that matter most. Our candidate survey is part of that effort. To help educate voters in our community, CCHCC will be conducting a candidate survey for the candidates for U.S. Senate, U.S. Representative (15th Congressional District), Governor, State Senator, and State Representative (103rd District). Our candidate survey will find out where all of the candidates stand on a number of health care issues including health reform, single-payer, and Medicare Part D reform, as well as Social Security for the Congressional candidates. We will be releasing a report of our survey results at the end of October that will be sent out to our listserv, posted on our website, and presented at a press conference in late October. If you would like to receive the Health Care Voter Guide that presents the candidate survey results, please check the appropriate box on the enclosed pledge form.

Now it’s up to us!
The passage of health reform was a huge success health care advocates across the country, but now our work is more important than ever. Much of the success of health reform implementation will depend upon grassroots activism to shape the state’s health reform initiatives and regulations. This is no time to relax and sit on our laurels after the passage of health reform. Health reform will create real improvements in people’s lives but there is much left to do. Please join us – attend a workshop, add your name to our action letters, and make a tax-deductible contribution to support our work and the educational materials we produce.

As always, thank you for your support and participation!